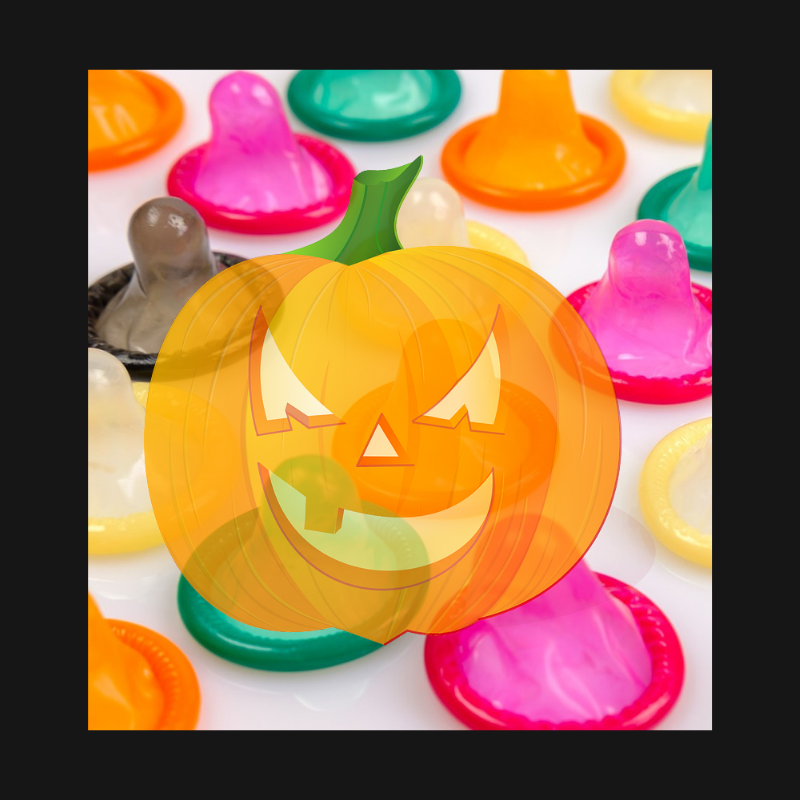 Halloween is a scary and sexy holiday. Screams both in horror and in pleasure. Here are the top Halloween condoms.

The reviews for the One glow in the dark condoms include: being dry (you might need lube), not being thin, and not glowing bright enough in the dark. The posting says shipping with discretions. Which is nice not to have the judgmental eyes of your neighbor when getting a box of condoms in the mail. This pack is a pack of three, the smallest you can get and perfect for trying something new. You can get them on Amazon for around $6.

Are you throwing an adult Halloween party? Want to hand out spooky condoms instead of candy? They look like lollipops but are used as wrappers instead. Great for goodie bags. If Scooby-Doo came back as an adult show they would be handing these out.

If you are looking for something that has more of a variety than lollipop condoms? Here is a pack of 24 condoms that are festive for All Hallows’ Eve. Designs of pumpkins, cats, and witches.

Your guests might think they’re chocolate, but there’s a different delight inside. You can get the pack for around $20.

Ok. This one is a costume, but with all the sexy costumes to choose from, we had to. Hey, at least we didn’t pick the penis costume. You know there is also a superhero condom costume. I guess the superhero gives out condoms. Who wouldn’t want that be in the next superhero movie?

The attitude the model wearing the costume is showing is the same that I would imagine you would have wearing this. You can get it for around $32.

Trick or Treat! These are defiantly the treat part. Most flavored condoms are fruit flavors: orange, banana, mango, etc. This pack from SKYN has three flavors all cocktails: Pina Colada, Passion Daiquiri, and Cherry Sunrise.

SKYN condoms are also non-latex for the people who are allergic or have a partner that is allergic.

Did you like these condoms? Are you ready for Halloween? Hopefully, these items gave you some ideas on how to get in the spooky spirit.

The pricing was accurate at the time of writing. The prices may have changed or the product may no longer be available. To help you better with finding condoms we have linked to Amazon. We do receive a small amount of money if you buy from the link. There is no extra cost to you if you do. We do this so that we can continue to operate and telling people about condoms.